Asylum and immigration : what the European youth thinks about

2352 young people from 43 European countries between 16 and 27 had their say in the survey conducted via Facebook by the European Youth Parliament from 13 - 26 September 2011, in cooperation with Stiftung Mercator. Toute l'Europe publish today the complete results of this poll. 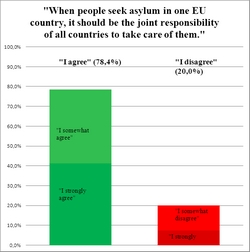 The big debate over immigration and asylum policy in Europe was stirred by a number of refugees arriving in the Mediterranean - mainly in Italy - as a result of the Arab spring.

As a result of the Dublin II regulation, the EU member state where a person seeks asylum is responsible. In the case of Italy this led to hot debates between European countries, with Italy demanding a common effort and other countries denying it.
The young people taking the Poll clearly demand a common effort in this issue.

Interestingly, according to 2011 Eurostat data, while the numbers of asylum seekers increased in countries of the southern Mediterranean, taking care of most asylum seekers are still clearly France and Germany. 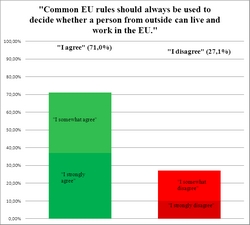 The opinion on this in different countries is remarkably in line with the number of asylum seekers: young people from countries with many asylum seekers are very much in favour (89% and more in France, Italy and Germany); in other countries, the consensus is not so strong (66% in favour in the new member states of 2004/2007).

When a person from outside wants to come to the European Union or stay there, the rules to decide about their status are still mainly national ones and different from country to country. Critics call this a “lottery” , while others maintain the right of each country to decide who can stay or go.

While there are already some common policies, like the “Blue Card” for some highly qualified workers, most young people in our Poll called for even further European efforts on this. 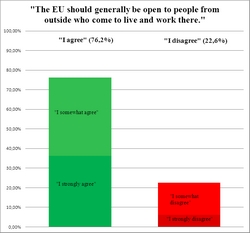 The debate whether we generally should be open to immigration is debated in many ways - involving demography, employment, and cultural differences.

The young people taking the survey have a clear opinion: Three quarters of respondents are more or less in favour of immigration generally, just over one fifth opposes it. 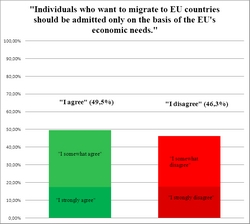 While the Poll participants were favourable towards immigration in general, they do not agree on the conditions.

The question on whether EU economic needs should be decisive on this question produces a split down the middle: While a slim majority of 49.5% favours this line, a very substantial minority of just 3 percentage points less opposes it.

Another sign for the trend towards the middle is the very low number of total respondents who strongly agreed or disagreed: Just barely 35% took this option, compared to at least close to 50% on all other questions.

Similar to Question 3, the young people participating are generally in favour of people from different cultures living together in Europe. 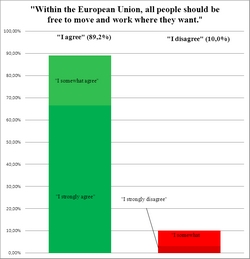 The strongest consensus we found in our Poll: Almost 9 out of 10 young people are in favour of free movement within the European Union. The respondents are the first generation which grew up in a borderless Europe - and is therefore clearly opposed to attempts to limit movement or the right to work.

The highest support can be found among young people in Romania and Bulgaria - who currently are denied this exact right. 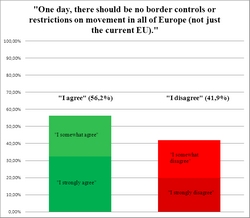 When it comes to Europe as a whole, beyond the current EU, the situation is much less clear.

Just a slim majority of 56.2% favour a Europe without border controls or restrictions on movement, even if the date for that is just “one day” .
In the current 27 EU member states, the majority is even smaller (53%), while 45% oppose the notion of a borderless Europe.

Not very surprisingly, the numbers differ when looking at countries currently not in the EU or the Schengen area: There, 69,8% find a borderless Europe desirable.

Very similar are the results to the first of two general questions we asked: Should the EU be further enlarged? While 55.9% of all respondents agree, there is substantial opposition.

When looking only at the current EU member states, the agreement with further enlargement is just barely over 50% while rejection comes up to almost 45%.
Even those who would generally like more European integration (see next question) are not necessarily in favour of more integration: 35,8% of pro-integrationists oppose further enlargement. 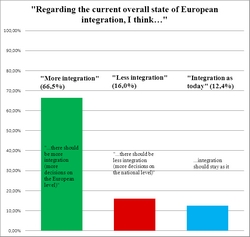 Two thirds of the participants generally favour more integration, a result that has not much changed since we last asked this question in May.

We were especially interested in the opinion of young people from the states currently under scrutiny from the European Union for financial troubles: Greece, Ireland, Italy, Portugal and Spain. Interestingly, young people from those countries favour more integration stronger than the rest: 73.3% of respondents from these states want more integration.

Apparently, times of crisis do not prompt an anti-European atmosphere as often suggested. Young people rather seem to trust common solutions more than their respective governments.

Commentaires sur Asylum and immigration : what the European youth thinks about